As the first physiological line of defense and the largest organ, skin is always involved in the function of the body, maintaining the unity of opposites between the body and the natural environment, and the abnormal situation of the body can also be reflected on the skin surface. The skin has almost perfect physiological protective functions, such as barrier, sensory, body temperature regulation, absorption, secretion and excretion, the two of which play a very important role in maintaining the health of the body. The most common causes of skin diseases are infectious and allergic dermatitis. However, in addition to the degenerative changes of aging, senile dermatosis, skin cancer and other important skin diseases, attention should also be paid to various skin disorders caused by side effects associaed with drug therapy.

Skin diseases can be classified into viral skin diseases, bacterial skin diseases, allergic and autoimmune skin diseases according to the cause of the disease. Urticaria is a localized edema reaction caused by increasing the permeability of the small blood vessels in the skin and mucous membranes. The basic symptom is the wind group on the skin. Usually, the skin is itchy first, then followed by a wheal of bright red or pale skin color. A small number of patients have edematous erythema. The size and shape of the wind group are different, and the onset time is uncertain. Some patients may be accompanied by nausea, vomiting, headache, head swelling, abdominal pain, diarrhea, and severe patients may also have chest tightness, discomfort, pale, heart rate, pulse weakness, elevated blood pressure, and systemic symptoms.

Chronic idiopathic urticaria (also called chronic spontaneous urticaria) is defined as itchy hives that last for at least 6 weeks, with or without angioedema, and that have no apparent external trigger. The condition generally has a prolonged duration of 1 to 5 years (persisting for >5 years in 11 to 14% of patients) and has a detrimental effect on patients’ emotional and physical health-related quality of life. As the current mainstay for initial treatment, H1 antihistamines are the only agents licensed for use in patients with chronic idiopathic urticaria. However, a majority of patients do not have a response to H1 antihistamines, even when the drugs are administered at three to four times their licensed dose.

Here we report the results of a phase 3 clinical trial in patients with chronic idiopathic urticaria in which we evaluated the effects of three doses of omalizumab as compared with placebo.

In most clinical trials, the recruitment of patients is often the primary difficulty. In order to obtain reliable and statistically significant experimental data, researchers need patients aged 12 to 75 who met all the following criteria: a history of at least 6 months of chronic idiopathic urticaria, the presence of hives associated with itching for at least 8 consecutive weeks, an urticaria activity score (UAS) of 9.5 to 10.5 during 7-day period (UAS7) of 16 or more), a weekly itch-severity score of 8 or more during the 7 days before randomization (week 0), a score of 4 or more on the UAS.

Another challenge in clinical trials is the statistical analysis of data. The statistical methods used in clinical trials must be carefully selected based on the data. In estimating the power of determining efficacy, we assumed a mean change from baseline to week 12 in the weekly itch-severity score of 9 points in the omalizumab group and a mean change of 3.5 points in the placebo group, with a common standard deviation of 6 points. Assuming an early discontinuation rate of 15% by week 12, we determined that the enrollment of 300 patients (75 patients in each treatment group) would yield a power of approximately 98% to detect a difference in treatment effect in the primary endpoint at the 0.05 level for any omalizumab group. For the primary endpoint, we analyzed differences between each of the omalizumab treatment groups and the placebo group by using an analysis-of-covariance model stratified according to the estimated baseline weekly itch-severity score (<13 vs. ≥13) and baseline weight (<80 kg vs.≥80 kg). The strata were predefined on the basis of the medians reported in a phase 2 clinical study. Missing data at week 12 were imputed with the baseline score (baseline observation carried forward).

Using the above strategy, we recruited appropriate patients to evaluate the effects of three doses of omalizumab as compared with placebo.

In this international, multicenter, randomized, double-blind and placebo-controlled study, we selected the doses for this study based on the results of a previous phase 2 dose-ranging study. Doses were administered at 4-week intervals, so as to ensure that the blinding was maintained. Each of the doses was administered by a qualified designated clinician who was not involved in the evaluation of the patients’ symptoms. This 12-week treatment period was followed by a 16 week follow-up period (for further details, see the Supplementary Appendix, available with the full text of this article at NEJM.org). Patients used an electronic handheld device to self-record data about validated urticaria.

We investigated the efficacy and safety of omalizumab over 28 weeks in adult and adolescent (≥12 years) patients with chronic idiopathic urticaria who had remained symptomatic despite the use of approved doses of H1 antihistamines.

Eligible patients were stratified according to smoking status and then randomized to receive either roflumilast (500 μg) or placebo once daily. A single-blind 4-week run-in period was followed by a double-blind 12-week treatment period. 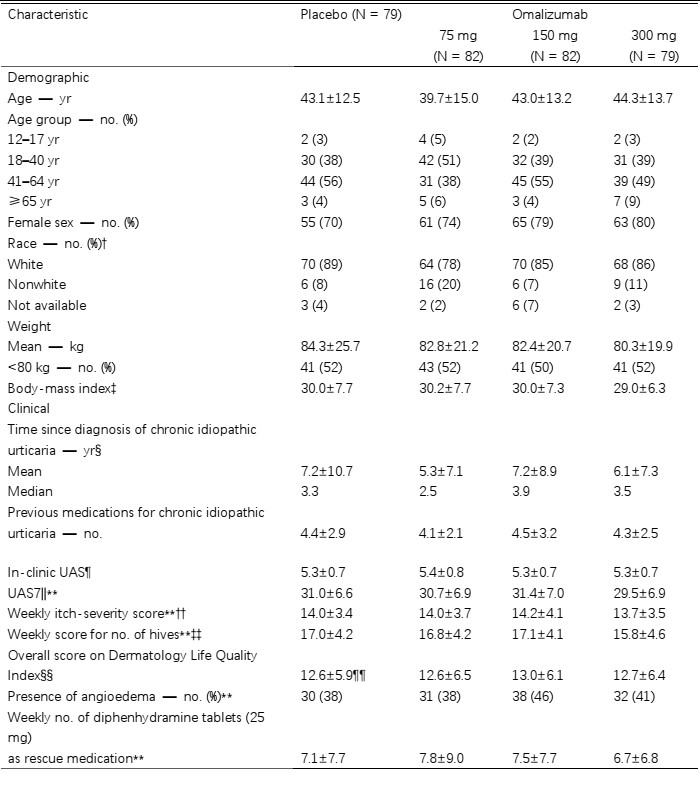 * Plus-minus values are means ±SD. The modified intention to treat population included all patients who had undergone randomization and received at least one dose of a study drug. There were no significant differences among the groups at baseline. Percentages may not total 100 because of rounding.

‡ The body mass index is the weight in kilograms divided by the square of the height in meters.

¶ The urticaria activity score (UAS) ranges from 0 to 6, with higher scores indicating greater activity. This value was defined as the largest value among those obtained on screening visits on days 14 and 7 before randomization and on the day 1 visit.

‖ The UAS during a 7 day period (UAS7) ranges from 0 to 42, with higher scores indicating greater activity and a minimally important difference (MID) of 9.5 to 10.5.

** These values are based on data that were collected in a patients’ daily diary in the week before randomization.

†† Daily scores for itch severity were 0 indicating none, 1 indicating mild, 2 indicating moderate, and 3 indicating severe, with weekly totals ranging from 0 to 21 and an MID of 5 or more points.

§§ The Dermatology Life Quality Index ranges from 0 to 30, with higher scores indicating a worse quality of life and an MID of 2.24 to 3.10.

¶¶ This value was measured in 78 patients in the placebo group. 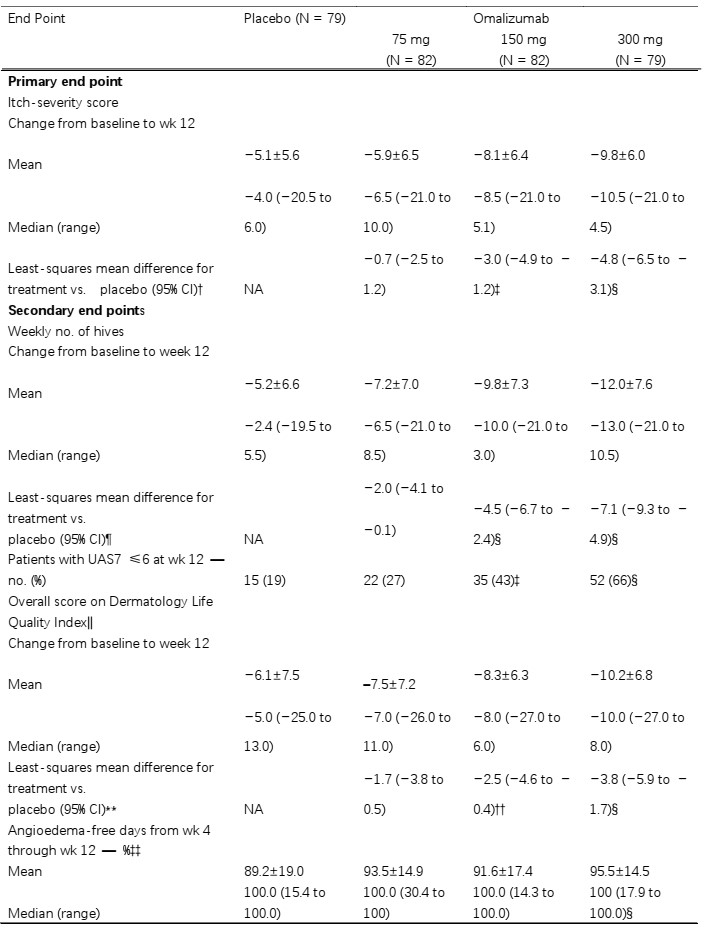 † Least squares means were estimated with the use of an analysis of covariance (ANCOVA) model stratified according to the baseline weekly itch severity score (<13 vs. ≥13) and baseline weight (<80 kg vs. ≥80 kg).

‡ P<0.01 for the comparison with placebo.

¶ The ANCOVA model was stratified according to the baseline weekly number of hives (<median vs. ≥median) and baseline weight (<80 kg vs. ≥80 kg).

‖ The baseline score on the Dermatology Life Quality Index was obtained before administration of a study drug on day 1, and there was no imputation for missing scores for week 12.

** The ANCOVA model was stratified according to the baseline overall score on the Dermatology Life Quality Index (<median vs. ≥median) and baseline weight (<80 kg vs. ≥80 kg).

‡‡ Angioedema free days were defined as the number of days for which the patient responded “no” to the angioedema question in the daily diary divided by the total number of days with a no missing diary entry starting at the week 4 visit and ending at the day before the week 12 visit. Patients who withdrew before the week 4 visit or who had missing responses for more than 40% of the daily diary entries between the week 4 and week 12 study visits were not included in this analysis. 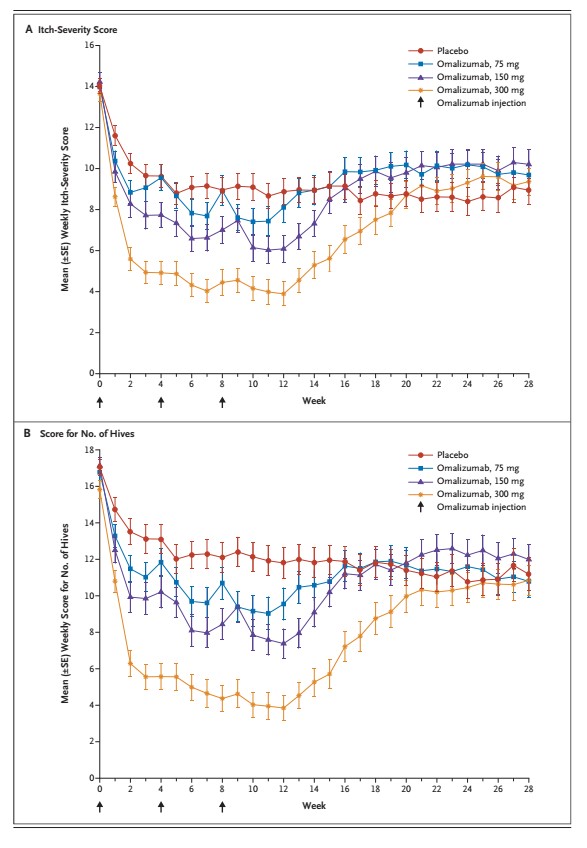 * The safety population was defined according to the treatment actually received.

‡ A severe adverse event was defined as the occurrence of symptoms causing an inability to perform usual social and functional activities. A complete description of the severe adverse events is provided in the Safety section in the Supplementary Appendix.