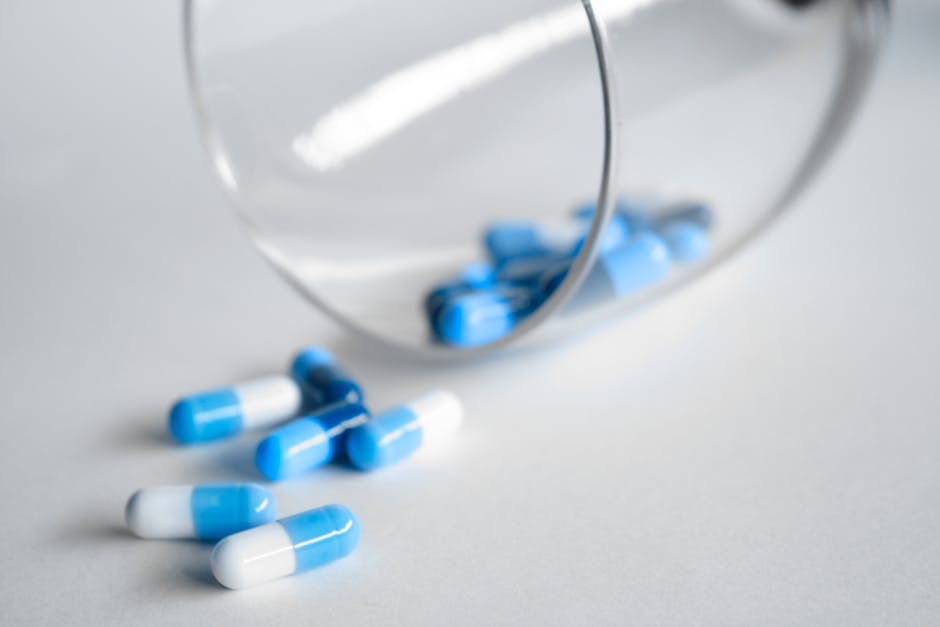 Abdominal aortic aneurysm (AAA) is an abdominal aortic dilation of 3.0 cm or greater, which develops from degeneration of the arterial media and elastic tissues. Beyond the inherent risk of rupture, patients with AAA also take an increasing risk of cardiovascular disease and death without regarding of other factors. Generally, AAA is uncommon in persons younger than 50 years; however, of those aged 74 to 84, 12.5% of men and 5.2% of women have AAA. Additionally, it accounts for approximately 11,000 deaths each year in the United States, and the mortality rate of ruptured AAAs reaches up to 90%.

So far, studies on the medical treatment of AAA are immature. Among those drugs, statins, antihypertensives, and antibiotics have been studied more. Treatment with statins has been shown to reduce cardiovascular mortality in patients who have developed AAA, and also slows the rate of AAA growth. In addition, although the use of beta-blockers, ACE inhibitors and AT1-receptor antagonists have no effect on not affect AAA growth, they may be indicated for comorbidities. Antibiotic therapy with roxithromycin has a small effect on AAA growth, and this effect must be critically weighed against the potential risk of wide-spread use of antibiotics.

There is evidence that simvastatin’s benefits principally come from lipid-modification. In addition, epidemiological studies suggest that hyperlipidaemia plays a role in aneurysm development. Therefore, the hypothesis is that additional advantages might be gained by aggressively reducing cholesterol with a combination of the lipid-lowering agent ezetimibe (a cholesterol absorption inhibitor) and simvastatin. When combined with simvastatin, ezetimibe has synergistic effects on cholesterol reduction, and it is found that the biological effects of combination therapy will be greater than that of simvastatin alone on parameters relevant to aneurysm expansion such as matrix metalloproteinases (MMPs), tissue inhibitors of matrix metalloproteinases (TIMPS) and cytokines.

Randomization is very important in clinical trials to prevent selection bias and insure against accidental bias. In the study, the randomization list was generated by computer. On recruitment, patients were allocated to the next available number according to the allocation sequence. In addition, all study drugs were provided in identical, sealed, sequentially numbered bottles. And each patient received two bottles marked ‘simvastatin 40 mg’ and ‘ezetimibe/placebo’ with an allocation number. Simvastatin tablets were standard open-label. Besides, ezetimibe and placebo tablets were identical in size, shape and color.

Another challenge is statistical analysis. Prism 4.0 software was used for statistical analysis. Besides, categorical variables were compared by a Chi-square test. Continuous data were presented as median (IQR) and analyzed using Mann Whitney paired test. And two-way analysis of variance (ANOVA) was used to perform analysis of secondary outcome measured between the two groups. Statistical significance was defined by a P-value of less than 0.05.

Using this randomization and statistical strategy, we insured that each patient had an equal chance of receiving any of the treatments under study and analyzed results in a trial to evaluate lipid-lowering pharmacotherapy on proteolysis and inflammation in AAA.

There were 18 patients scheduled for elective open AAA repair (Figure 1). Patients who had performance as follows were excluded: 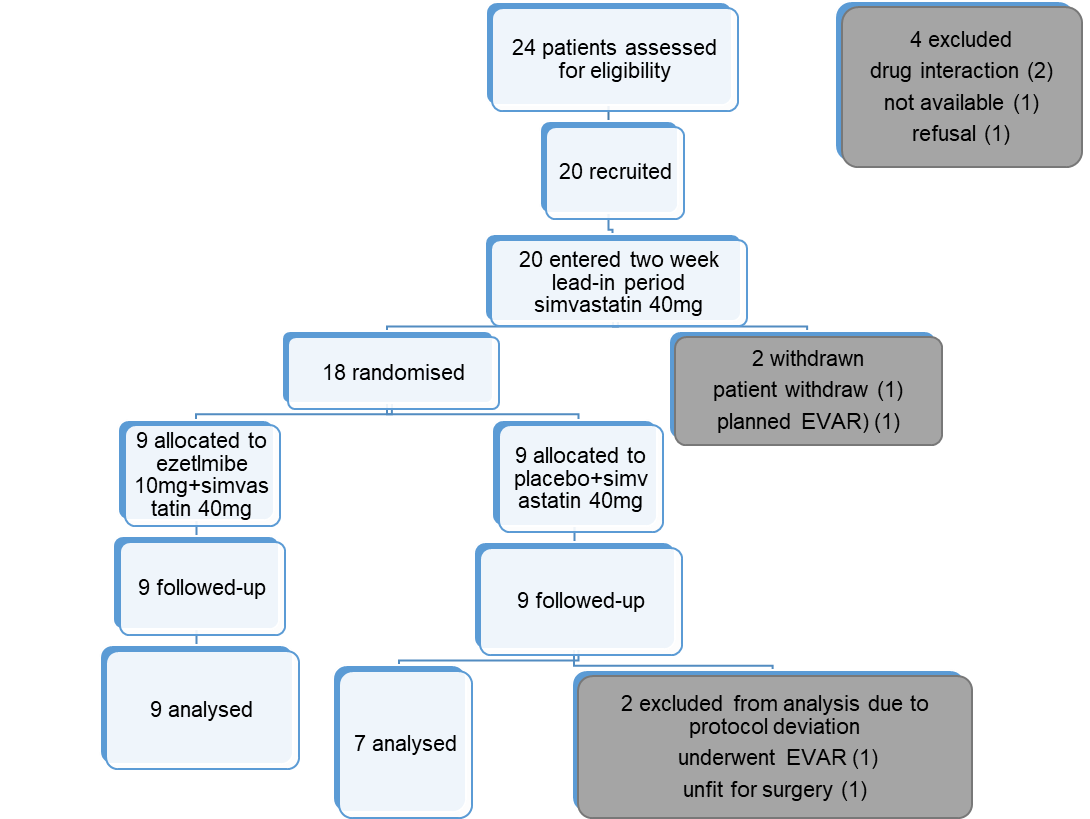 Patients were subject to a two-week lead-in period of simvastatin therapy, 40 mg daily prior to randomization, in order to limit confounding factors associated with pre-existing statins or doses taken prior to recruitment. Existing cholesterol lowering agents were stopped during this period. Then, participants (n=18) were randomized to receive simvastatin 40 mg plus ezetimibe 10 mg (n=9) or simvastatin 40 mg plus placebo (n=9). All patients took both tablets together every evening leading up to their operation, their last dose was taken at night before surgery. In addition, following the trial, patients continued statin treatment as normal clinical practice.

The median trial duration was 36 days (IQR 28.5-50.5) and 30 days (28-60) for the ezetimibe and placebo groups respectively (p=0.73), with no significant difference in lead-in period or mid-trial duration (Table 1). There were no adverse drug events in either group. Regarding primary outcome measures, aortic wall MMP-9 and IL-6 concentrations were found to be significantly lower in the ezetimibe/simvastatin group compared to simvastatin monotherapy (Table 2). The concentrations of MMP-1, -3, -13, TIMP-1,-2 , TNF-α, IL-1b and IL-10 were below the recordable levels of the assay. MMP-2 was detectible with median values just within the lower range of the assay (<25.4 pg/ml). There were no differences in plasma variables between groups (Table 3, concentrations of MMP-8, MMP-12, MMP-13 were below the recordable levels of the assay). Plasma total cholesterol and non-HDL cholesterol concentrations were significantly lower in ezetimibe combination therapy with non-significant reductions in LDL-C and TG. 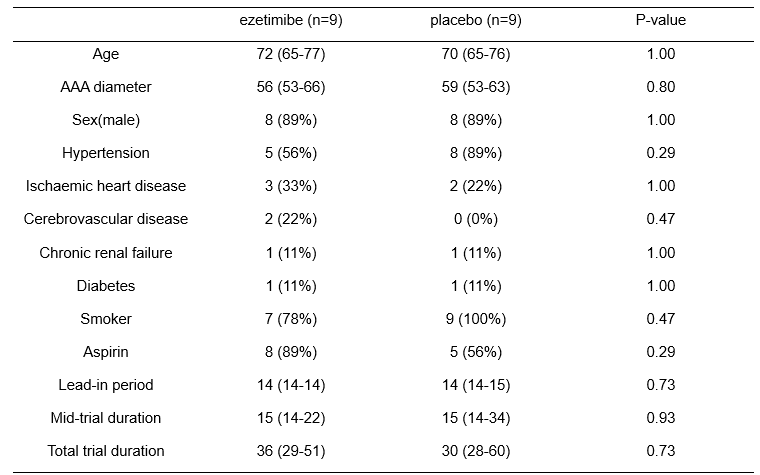 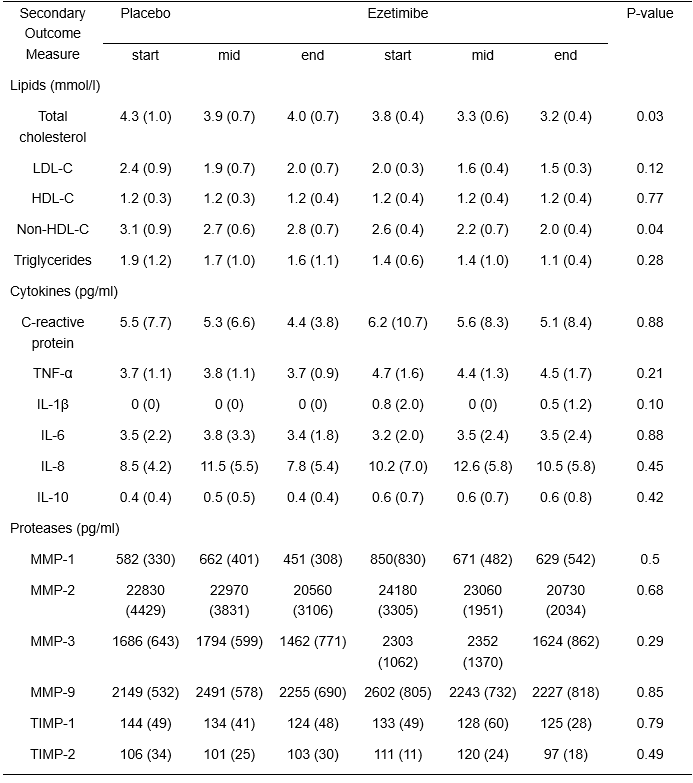